In May, nature appears at its best.

As in no other month, I am drawn out into the wonderful nature in May. At the same time, I start to get that urge to hunt again. Not a real urge, rather a desire or demand. It’s the anticipation of idyllic evenings and magical mornings in my hunting ground. So on this evening in May, I found myself being drawn out into the fields and meadows of Holstein once again.

The sun was already touching the horizon and signaling the end of the day. There was a south-easterly wind so I chose the “watchtower”, a closed seat not far from the edge of the woods with an area of grass to the front, rapeseed to the right and wheat to the left. Even whilst setting up, I could make out a barren doe at the hedgerow opposite, stretching to reach the fresh buds and new leaves in the shrubbery. I watched it for a while through my new Victory SF. It was a view so clear and bright as if I was stood directly next to her. And whilst I was busy watching this one grazing away, deep in thought, two more stepped out of the nearby woods almost unnoticed.

By the time I noticed them, they had already come closer and were now barely 40 meters away. With my naked eye, I could make out a weak yearling and another equally weak barren doe. Twin fawns from last year, I presumed. The buck was still in velvet; barren doe can be hunted in Schleswig-Holstein from September onwards only. I enjoyed this sight and then let my gaze drift. A pair of ears exposed another female amongst the mass of yellow flowers, confidently looking in my direction.

One last glance through the telescopic sight to check confirmed my suspicions: it was a young roebuck.

Meanwhile the buck and barren doe had come a bit closer, and now happily grazed at the edge of the rapeseed. Upon closer inspection I noticed that the supposed barren doe actually had a tush. My right hand intuitively went to grab the rifle. One last glance through the telescopic sight to check confirmed my suspicions: it was a young roebuck. Aiming at it I could now clearly recognize the tiny antler stumps. I did not hesitate for long and gave the runt the bullet. On the scales and broken up, he only reached 7 kilos.

Later on, as I conjured up a delightful dish from the roe deer venison, I reviewed the evening again. I was simply grateful. For the nature, its creatures and the hunting experience I had the privilege to enjoy. 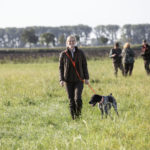 Anna Lena Kaufmann is a huntress, hunting dog owner, falconer and professional hunting journalist. The 32-year-old from Wohltorf in Schleswig-Holstein (Northern Germany) spends most of the time in her home hunting ground close to the „Sachsenwald” forest. She also likes to travel and has a great interest in other hunting countries and cultures.