Head of the ZEISS Centre of Excellence

Having started life as a Gamekeeper I have always loved the countryside, and hunting has always been in my blood. However, it wasn’t until I started deer stalking that I realised where my true passion lied.

Since the very first time I stalked a deer I was hooked. Not just the hunting side of things, but the deer themselves, their habits, the way they moved. It fascinated me how they could just disappear without a trace in front of my very eyes!

Hunting has always been in my blood.

As a recreational Stalker, I was very lucky as I could hunt 3-4 times a week due to the fact most of my friends were Gamekeepers who had little time for deer stalking. I couldn’t think of anything else I’d rather be doing.

I then came to a crossroads in my life and had an unexpected opportunity to take on an estate that I knew well and I decided to have a change of life and pursue a different path. As a result, almost 10 years ago, DGVM (Deer, game and vermin management) was formed and the clients soon started to flow.

Then, after a chance call to ZEISS who were located near to me in Cambridge, I found myself as a ZEISS Pro Stalker – I had always loved their products anyway so it was hardly a difficult choice to make.

Once I started to stalk everything else took second place.

Jim Riley: Behind The Rifle

Join ZEISS Pro Stalker Jim Riley for a wander around the ZEISS Centre of Excellence. Discover how Jim found his passion for hunting and why ZEISS optics are his first choice, every time!

Over time and through the many stalking clients I was taking out, along with the students who were attending training courses at my facilities, it became quite apparent that there were very little facilities that were similar where a potential client could go to actually try the products before they bought them. It was this eureka! moment where the idea of a Centre of Excellence was first born.

The concept was simple. Potential clients, regardless of whether they were my own or a referral from our extensive dealer network, would have the ability to actually come and shoot the scope they are interested in on an actual range (or out on a stalk) rather than simply reading about it online or seeing it in a glass cabinet. Furthermore, either they could purchase the scope at that time from myself on site, or purchase it from their dealer and head straight over to have the scope fitted to the rifle, zeroed on the range and ready to hunt that same evening!

As well as running the Centre of Excellence, I also travel around the UK accompanying ZEISS to various trade shows, including both the British and Northern Shooting Shows. I find this resonates well with the public as I have the advantage of first-hand hunting experience and knowledge on the subject, rather than just extensive product knowledge.

In addition to this, we have also hosted many of the product launch days, where both the Press and our Dealer network are able to put the new products through their paces on the range!

So, what’s my favorite product?

For me I never stalk without my RF binoculars, I had the old model for many years, but have recently got had my hands on the new Victory Rangefinders that were launched earlier 2018. It has greatly improved, with noticeably better light transmission and less weight to carry. You can’t beat being able to accurately get the distance to the target, the client can’t argue with the facts and when I say it’s too far they have to agree as the ZEISS RF is never wrong!

Then for a scope, for me it boils down to two, either the V6 2.5-15×56 or the V8 4.5-35×60. I normally shoot with a Blaser, so the rail mount option of the Victory V8 is an absolute dream to mount and dismount, reducing the time and hassle of having to re-zero the rifle every time. The optical quality, light transmission and build quality put this scope at the top of my list. 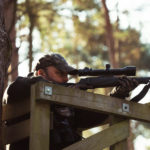 Discover how Jim found his passion for hunting and why ZEISS optics are his first choice, every time!