The Northern Bald Ibis is known for its rather bizarre black neck feathers. These mantle feathers are erected in birds, a behaviour that also appears illustrious outside courtship rituals. The particularly gregarious birds always gather in dozens and seem to bow to each other in greeting. Colonies are often made up of more than a hundred birds. The Northern Bald Ibis only breeds in colonies, which explains the lack of breeding success with individual pairs held in zoos. The males and females are similar in plumage, although females tend to be a little smaller and lighter. Correspondingly, individual males do not mate with several females – as can be assumed from the minimal sexual dimorphism. Both, males and females, participate in nest building and the rearing of their young.

The extinction of a good-luck charm

As big as a goose, but a member of the pelican family, the distinctive yet not necessarily attractive bird has always been rather conspicuous. Its Latin name, Geronticus eremita, describes it as an old man. Unfortunately, its distinctive appearance was also its downfall. Up to the 17th century, there were large numbers of the Northern Bald Ibis in southern Germany, Austria, Switzerland, Italy and Hungary. However, intensive hunting led to its complete extinction in central Europe.

In ancient Egypt, the Northern Bald Ibis was worshipped as a bringer of light and, according to Islamic legend, showed Noah the way to the fertile Euphrates valley. In the Orient, the bird was a protected species in the Middle Ages, as it was believed that it carried away the souls of the dead. During this same period, central Europeans simply consid- ered it to be a delicacy to grace their tables. Others hunted it as a trophy to stuff and display in their homes or trapped young birds to be shown in zoos. This explains why colonies in the wild today are found only in Morocco and Syria. One semi-wild colony also exists in Turkey.

While the colonies in Syria continued to decline over the last 20 years, larger numbers of birds survived in the Souss- Massa region of Morocco. In the 1990s, after mysterious deaths, the wild colonies of the Northern Bald Ibis in Morocco were reduced to only 59 breeding pairs. Thanks to intensive conservation measures, the habitats in Morocco have made a recovery and are now home to around 700 birds. The first conservationists from the United Kingdom monitored the habitats, educated local ranchers and raised public awareness of the particular importance of protecting the birds. In the early 1990s, the Souss-Massa National Park was established to guarantee maximum protection of the species and, with the aid of intensive research on the part of the Moroccan government and the local branch of BirdLife, to determine the best ways of preserving the habitats of the Northern Bald Ibis. With measurable success of the conservation measures:

IN NOVEMBER 2018, BIRDLIFE INTERNATIONAL REPORTED THAT THE STATUS OF THE NORTHERN BALD IBIS HAD IMPROVED FROM THE CATEGORY OF ‘CRITICALLY ENDANGERED’ TO ‘ENDANGERED’.

The first recolonisation projects in the South of Germany, Austria and Italy are also showing successes in central Europe. Biologists train juvenile birds bred in zoos and show them how to migrate south by leading the way in ultralight aircraft to habitats where they could survive in the wild.

Nevertheless, the survival of the species is by no means cut and dried. In Syria, the conservation measures can only be resumed when the country finds true peace again. Clear proof of how comprehensive protection can work is shown by the success of the project in Morocco. However, extensive educational effort and intensive dialogue with local ranchers and conservationists remain essential, not only in the breeding grounds, but also in the wintering grounds in Ethiopia, Saudi Arabia and Yemen.

This requires not only the work of dedicated bird conservationists, but also extensive funding that, in the case of the Northern Bald Ibis, is contributed by the Prince Albert II of Monaco Foundation and ZEISS.

ZEISS has been concentrating on the protection of wildlife threatened by extinction for many years, such as the Black Rhino and the Northern Bald Ibis. At the same time, ZEISS has sponsored the scientific activities of BirdLife International in the categorisation of threatened species of birds. The passion for observing the glories of nature with premium optics lives from bio- diversity. Here it is essential to protect every single species whose habitats are threatened by humans. After all, the world of birds would be much less fascinating without its gregarious punk, the Northern Bald Ibis. 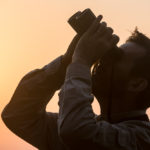