Not every bird with a few long flight feathers sticking out of its wings gets to belong to the long- winged club. It is just the chosen few, those who can really fly from one edge of the world to the other. And they are in trouble.

Eilat is known to be a fantastic place to see bird migration. Nevertheless, this May, Eilat has experienced one of the most massive migration waves of passerines we can remember. The air was thick with Sand Martins, the ground swarmed with Corncrakes and Thrush Nightingales and the Salvadora Persica bushes in the Eilat Bird Sanctuary hardy carried the weight of the Barred, Garden and Eastern Olivaceous Warblers. Red backed Shrikes were hunting it all down and Spotted Flycatchers, Common Redstarts and Golden Orioles arrived in ridiculously high numbers. River Warblers, usually a rarity here, recorded only in some springs, turned into a common migrant, in every bush.

Our spring began slowly, with low numbers of passerines during February. March and April were also well below average. But then came a May that really rocked the migration party.

One may think this is great news. Unfortunately, it’s not. In the first ten days of May, alongside this massive migration wave, we have also seen very high mortality, reported from everywhere in Eilat and the Arava valley. Together with the INPA, we have collected hundreds of Corncrakes and all sorts of songbirds, weak and dying.

It’s not the absence of food – the bushes at the bird sanctuary are still fruiting and able to support the migrants, but the birds still die here too; they’ve just arrived in a terrible physical condition. The average weight of all the main species is 10% to 15% lower than in previous years. Another clue we have is the fact that the migrants are late this year. Today is the 23/5/21, and the bird sanctuary is still full of migrants.

Explanations as to what has happened are nothing but an educated guess at this point. Huge numbers at the first large stopover site after the Sahara Desert, late and in bad physical condition can indicate lack of resources south of Eilat, maybe even in the horn of Africa, south of the vast desert. Some people say it’s the drought, some blame it on the locust or even pesticides used against the locust, or the south-eastern winds that brought the locust also pushed the birds. It’s all a guessing game.

The work of the International Birding & Research Centre, Eilat (IBRCE) is to safeguard the skies of our flyway and stopover sites that the birds use. It requires long struggles over many years to save and improve these stopover sites and habitats, and reduce hazards to birds. We maintain and run the Bird Sanctuary as a habitat for a very large diversity of birds, and the natural resources here are abundant.

Just yesterday, we built perches and changed how the sewage works maintain their reservoir, just for the birds, and we fight to safeguard the Flamingo pools from new plans to lodge people there. In the fields and orchards, we work with the farmers to understand the pest control services migratory birds give to their farms and convince them to make the fields a better and safer habitat for the birds as a method to increase profit, and we sum it up with the “generous garden” – a community educational program to enhance the awareness to ecological system services in the agricultural villages here.

For the people of Eilat we offer community events in our diversity gardens that serve as stopover sites for the birds at the sanctuary; our main goal is to encourage a positive public opinion of conservation for the sake of the birds. All this adds up to making Eilat and Southern Arava a much better and safer place for the birds.

In some years, when migration is slower, it may seem a bit out of context, but these years when Eilat becomes so important for the populations of the most vulnerable birds, one can understand the effort we invest here.

The long-winged club is not for every bird. It’s for the tough ones only. Global climate change has made their lives harder with longer migration routes, faster migrations and desertification among other heightened risks. This spring in Eilat revealed the challenges and sometimes tragedies they face.

We are proud to be at their service. At the continent’s crossroads, on the edge of the desert, good people are here to help and serve – the Bird Sanctuary’s team of volunteers are here to care for the weak and fight and change reality for the masses as they struggle across land and sea.

We would like to thank Zeiss optics for its long lasting support of our conservation work. Zeiss contribution here is local, but its effect is far reaching, supporting bird’s populations in Europe, Asia and Africa. 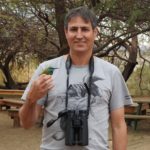 Noam Weiss is the director of the IBRCE in Eilat. He is responsible for maintaining and improving the habitats of the bird sanctuary and for replenishing the food stocks for the migratory birds in Eilat and the southern Arava valley. He also raises awareness and runs seminars to encourage people to protect the birds and help out the birders.