BIRD MIGRATION IS AN ENDLESSLY FASCINATING PHENOMENON THAT TAPS INTO A VARIETY OF OUR BASIC IMPULSES AND DESIRES.

There’s the sensual, animalistic connection it nurtures and strengthens with the cyclical changing of seasons, and the subtle sub-seasons within them; the odd but very human urge to install order and a sense of control over the relative chaos, by meticulously counting and recording each and every bird – getting our ‘ducks in a row’ (often literally); there’s the science-inspired desire to better understand the mechanisms and mysteries of the such natural phenomena that still lie largely outside our understanding (and migration still holds more questions than answers); and at the heart of it, a very pure, childlike wonder that underpins and overarches all of its aspects, and no matter how many hours are spent immersed in it, it seems implausible such a wonder will ever begin to dim. On the contrary – in truth, that wonder seems to grow progressively brighter as the years go by.

Bird migration is everywhere, making it a universally accessible, constantly changing wonder of nature – and if you’re lucky enough to live on a coastal flyway at the edge of a continental landmass (well, it was more about planning and sacrifice than luck), then the possibilities for a migration junkie like myself are almost endless. Better still, when you position yourself at the axis of various topographical, geographical and coastal features, there are different ‘subgenres’ of bird migration that open up to you – meaning that during the right season, there are different choices, depending on prevailing wind and weather conditions.

Here in the Filey area, on the North Yorkshire coast of England, you can break ‘active’ migration down into three types: on the ground (where most of the migrants are grounded and feeding / resting in situ), sea-watching (involving seabirds, wildfowl, waders and whatever else happens to be migrating out over the waves), and visible migration, aka Vismig.

Visible migration is, literally, the migration you can observe from where you’re positioned (as opposed to, for instance, the ‘invisible’ migration that takes place at night, or at higher altitudes). Spring and autumn are both productive, although autumn sees a greater abundance of birds, a wider variety of species, and a longer period of potentially productive passage.

THERE ARE EFFECTIVELY TWO KINDS OF VISMIG MOVEMENTS HERE ON THE NORTH YORKSHIRE COAST:

There are effectively two kinds of vismig movements here on the North Yorkshire coast: inbound (with birds arriving in off the North Sea from mainland Europe, Scandinavia and beyond), and coastal (with birds following the leading line of the coast, generally north in spring and south in summer). Each can see huge, dramatic movements and each is much improved by an appreciation of where best to capitalise on the prevailing movements of the day; for now, we’ll focus on inbound migration (but will take a look at the latter in part two).

When is best? This kind of inbound, oversea vismig is often at its most potently impressive in autumn, and where I’m based – roughly halfway up the east coast of the UK – it’s the late autumn influxes of Scandinavian passerines that really take your breath away.

Birds can arrive in a variety of conditions and at any time of day, but there are certain elements that need to come together for those really big days, and here’s the perfect scenario:

It’s mid / late October, and countless masses of migrants, waiting to leave Scandinavia, have been temporarily held up by poor weather. Then, suddenly there’s high pressure, clear skies and favourable winds above them, triggering a huge exodus of Redwings, Fieldfares, Blackbirds, various finches, Goldcrests and other songbirds – which are then drifted by an easterly breeze over the North Sea. As their journey progresses, so they encounter weather – perhaps low cloud, drizzle, fog, or a combination thereof – and as navigation becomes more difficult and the risks heighten, making landfall becomes the number one priority.

On clearer nights and days with a similarly beneficial wind (or at least a gentle one), then stopping on the coast isn’t necessary – why not carry on to more optimal habitats? – but with challenging weather comes the need to reach dry land above all else. Of course, it’s not always possible to perfectly predict when the big days are going to happen; but with a basic understanding of the weather forecasts and the opportunity to capitalise on them, it’ll happen in a big way a least a handful of times over the season, and to a lesser degree on many other days, too.

And when it happens, there’s nothing quite like it. Stood on the end of Carr Naze, the ‘topping’ of Filey Brigg – a promontory that stretches out into the North Sea like a joke shop witches finger just a few minutes from my house – and soaking up a major arrival is true birding bliss.

Imagine floods of birds arriving at all heights:

below you as they avoid the waves and follow the cliffs; above you at various levels, from a few metres to wherever visibility ends, ghosting in and out of the cloud bank like distant aircraft; and most spectacularly, at head height – squadrons appearing out of the grey and bulleting past, sometimes close enough to reveal the exhilarating sound of their wingbeats, just a metre or two away, for a split but unforgettable second.

On those days, the impulse to count becomes an increasingly doomed and pointless one – rough estimates are as good as it ever gets – with birds arriving at all distances and altitudes in unpredictable pulses. But one of the extra-special elements of experiencing such an arrival here at Filey is the opportunity to enjoy the phenomenon at such close quarters – close enough to feel like you’re in the eye of a unique and welcome storm, and close to enough to look directly into the eyes of many of these death-defying super-travellers as they succeed in their mission to migrate across a rolling, unforgiving North Sea. 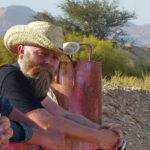 Lucky enough to spend plenty of my time enjoying birds and wildlife, I’m based here on the Yorkshire coast, on the western seaboard of the North Sea (where I grew up, and returned to several years ago). Among other things I’m a field ornithologist, nature writer, speaker and guide, comms specialist for conservation causes and a musician / songwriter with Morning Bride.