A test report by Rouven Kreienmeier

In the spring of 2020, the optical pioneer ZEISS announced that it was launching its first thermal imaging camera. I had the opportunity to test a prototype of the new ZEISS DTI 3/35 for six months before its official release. Now I’ve also gotten my hands on the final product and it’s time for an initial review.

The ZEISS DTI 3/35 comes in the typical ZEISS packaging. The thermal imaging camera is shipped in a carrying case made of 100% recycled plastic. In addition to a carrying strap, a charging cable, and a USB cable, there are also 3 adapters for the most popular hunting countries in the world, a lens cleaning cloth, and the usual paperwork and instructions. During the unboxing, I begin to increasingly look forward to actually using the device in the field. A little bit like Christmas.

The DTI 3/35 has a high-quality feel. The rubber coating offers a non-slip grip. The device has a conical design and feels great in either hand – a benefit that shouldn’t be underestimated in the field. At night, I rest my right shooting eye, meaning I hold the thermal imaging camera in my left hand and look through it with my left eye. When counting deer from the car, I look out of the passenger window with my right hand and my right eye. The design of the DTI makes both possible intuitively. Especially because the buttons aren’t lined up directly next to each other in a row.

Even in absolute darkness, it’s practically impossible to get the buttons mixed up. You don’t need to remember their positions either, because it’s easy to feel the difference. The front button switches the device on or into standby mode. The record button is round and located directly in front of the left and right buttons, which are  used to control the zoom in increments of 0.5x or navigate through the menu. The menu can be accessed by holding down the last button.

The ZEISS DTI 3/35 is equipped with a large LCOS display. It has a resolution of 1280 x 960 pixels and an image refresh rate of 50 Hertz. The image is crisp and comfortable to look at, even over long periods of time.

When you don’t want to simply observe with the DTI, but instead stalk or shoot, you can wear it with the supplied carrying strap. Because it’s attached at two points, it doesn’t swing annoyingly back and forth across your chest. When using the prototype, I did find the bright indicator light disturbing at night, however, and therefore covered it with tape. The green light indicates whether the camera is in operation or standby mode. A red light indicates that the battery is low. I am pleased to report that ZEISS improved this and significantly reduced the brightness in the production model. But whether or not you still want to cover them with tape is up to you.

If you do cover the light with tape, you might run the risk of leaving the camera in standby mode after hunting. The effect will be a dead battery the next time you head out, since the device doesn’t shut off automatically. Your own carelessness will be irritating because the rechargeable battery isn’t exchangeable. At least it lasts up to seven hours depending on the temperature and your usage patterns, which is significantly longer than other thermal imaging devices in this class.  I managed to go out three times on one charge without running out of power.

You turn the ZEISS DTI 3/35 on by pressing and holding the power button. It takes 11 seconds for the camera to get fully up and running – I timed it. A short press of the button puts the camera into standby, and after another short press, it’s immediately back up. This means that it makes sense to keep the camera in standby mode when out in the field in order to be able to react quickly to noises or movements. You don’t need to worry about the battery, it will easily last in standby mode during a long hunt. The thermal imaging camera calibrates itself automatically. This is the “click” you hear during use. The calibration process takes less than half a second and occurs very rarely. The noise is extremely quiet and the feature can be switched to manual mode in the menu, if necessary. This isn’t very practical, however.

The heart of the DTI is the sensor with a resolution of 384 x 288 pixels. There is certainly room for improvement in the future (mainly due to technological progress), but in the DTI’s price range, the sensor is top of the line. Incidentally, a thermal imaging camera’s software can still squeeze a lot out of its sensor. I notice this especially when directly comparing the prototype with the production model. So I think we can expect to see a further increase in the already impressive image quality through regular updates from the manufacturer.

The DTI features a basic optical magnification of 2.5x with a field of view of 19 meters at a distance of 100 meters. I think this makes the DTI a good compromise between field and forest hunting. Comfortable viewing over long distances is possible, both during stalking and when hunting from a blind. The range is specified as well over 1000 meters. Such distances only rarely play a role in hunting, which is why I’m not going to cover this aspect in more detail. In any case, identifying red deer at 300 meters and distinguishing them from other species of game is no problem. When it comes to image quality, however, I’d like to let the images at the end of the report speak for themselves.

At around 2900 euros, the ZEISS DTI is not the most affordable camera in its segment. In return, however, it offers three major advantages over the competition

First, there is the ZEISS Hunting app. It offers a number of useful features, such as a weather forecast, a hunting diary, or the ability to digitize your own hunting ground. The app also allows users to register their products and, in some cases, connect them to their smartphones. In the case of the DTI, this is done via WLAN. This makes it possible to stream the image from the DTI via your tablet or smartphone. This feature probably won’t see much use when sitting in a raised blind, but rather when hunting from a vehicle or counting game at night. This allows everyone in the vehicle to follow the action. In addition, the images or videos taken can be easily downloaded from the DTI to your smartphone via the app. The nice thing about it is that the file sizes are very small because of the sensor resolution and therefore don’t fill up the phone’s storage.

And if something should ever happen, the third advantage comes into play – ZEISS’ customer service. Everyone knows that ZEISS is renowned for its excellent customer service. So if you ever damage your DTI, simply send it to the customer service center in Wetzlar or have your dealer do it. Your product won’t be shipped back and forth across Europe, but will be repaired by highly qualified specialists in Germany.

And now, finally, the images taken by the DTI in the field.

Whether for game observation and stalking or faster and more accurate identification – the DTI 3/35 gives hunters a considerable advantage in the forest…. 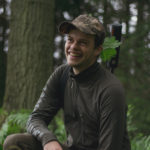 As the son of a family of foresters, Rouven grew up hunting. At 26, after studying chemistry, he decided to turn his passion into his profession. Known as jagenNRW, he now produces hunting films and publishes them on Hunt on Demand and other social media platforms. Aesthetics are very important to Rouven, and he wants “to show the public hunting as it really is.” And whenever he heads out on a hunt, his wire-haired dachshund Jule from his father’s kennel is always by his side.