Scientists are rushing to study the tiny plastic particles that are in marine animals — and in us. The distribution of microplastics into the world is extensive; however, the implications of microplastics are not yet thoroughly understood.

Dr. Elke Fischer from the Department of Earth Sciences of the University of Hamburg is providing compelling insights with her research on microplastics and shares with us the challenges she faces using microscopy to identify these miniscule particles:

Microplastics are literally on everyone’s lips – why should we worry about them?

This is a question I am often asked, usually somewhat provocatively, in the sense of, “that doesn’t bother me”, or “it’s only plastic”…

We now know that microplastics are present in all areas of the environment – from water to sediments and soils to the atmosphere – and can also be absorbed by animals and humans. We also see that microplastics lead to changes in living organisms, for example in the efficiency of food intake, reproductive capacity and even mortality. So far, this evidence has mainly come from laboratory studies and needs to be further investigated under real environmental conditions. Due to their ubiquitous presence, microplastics are also part of the human food chain – in our drinking water and food, and in the air we breathe.

Personally, I see this plastisphere as a testimony to how careless and negligent we treat our natural resources and to the fact that the behavior of the human species is also unsustainable in this respect. For me, the fact that we so carelessly release into our environment substances that we have synthesized, i.e. that do not belong to the earth’s natural matter cycle, is disgraceful.

However, on an ecosystem level and in scientific findings, these are already becoming apparent. Currently, for example, the European Commission is funding several larger research projects that are looking into the consequences of microplastic pollution in humans. And here, the hypotheses investigate neurological damage or the triggering of cancer due to microplastics.

How do you study and identify microplastics?

A particular challenge in the analysis of microplastics in environmental samples is the sample preparation, which is very time-consuming. It is important to accurately separate plastic particles from all others, as only then can their number, shape and size be determined. Using beach sediments as an example, the first step is to destroy biogenic organic substances such as algae, wood, leaves, calcareous shells, etc., as they would otherwise mask the plastic signal. In a second step, the mineral components (e.g. sand) are separated from the microplastic particles by density separation. After transfer to filters, these can then be further investigated, which is primarily done using microscopy and subsequent verification of the identified microplastic particles via spectroscopic methods such as FTIR and Raman spectroscopy.

Another challenge is a lack of automation, especially for identifying microplastic particles on the filter. This is made more difficult by the fact that there are still residues of biogenic and mineral substances on the filter and each matrix behaves differently. Plastic particles are not easy to detect even with the use of microscopes and often resemble natural substances in their shape. Criteria such as the shape of edges or fiber ends, the absence of cellular structures, etc. can be used to help make a decision, but the results of numerous studies point to a high rate of misinterpretation and the use of further analysis, e.g. spectroscopic methods, seems essential.

How does microscopy support your research?

Microscopic methods are almost always used first to identify microplastics. However, the use of light microscopy alone is now controversial, as it has been shown that there is a high degree of misinterpretation, for example in differentiating between synthetic fibers and natural fibers made of cotton or cellulose. But the spectroscopic methods of FTIR and Raman are also based on optical (microscopic) identification, in which the light source is replaced by a laser excitation source of specific wavelengths. In the current research focus, it is of particular interest to be able to detect the smallest possible particle sizes down to the nanoscale. 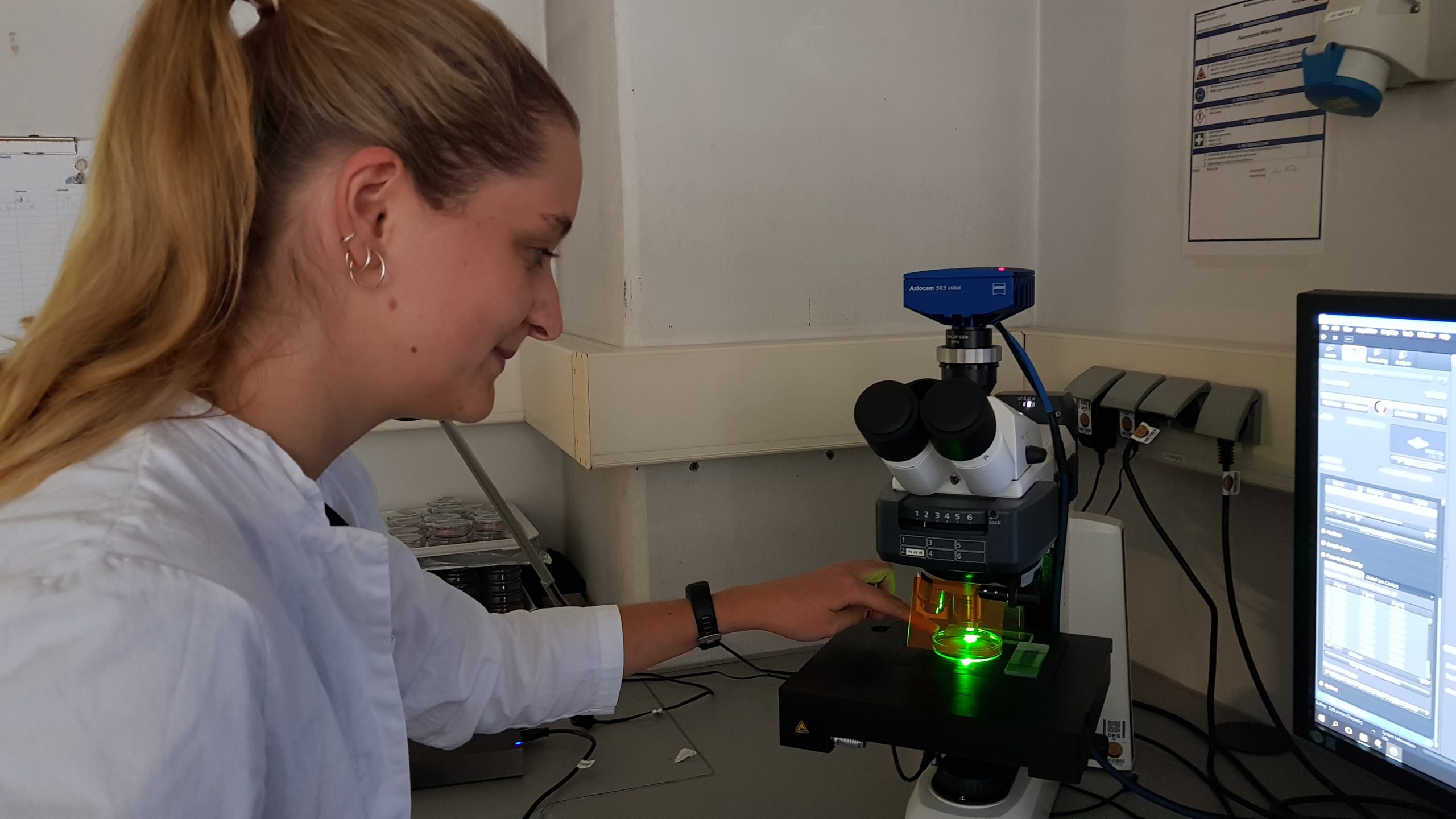 Anni Deuke is transferring the samples to the microscope 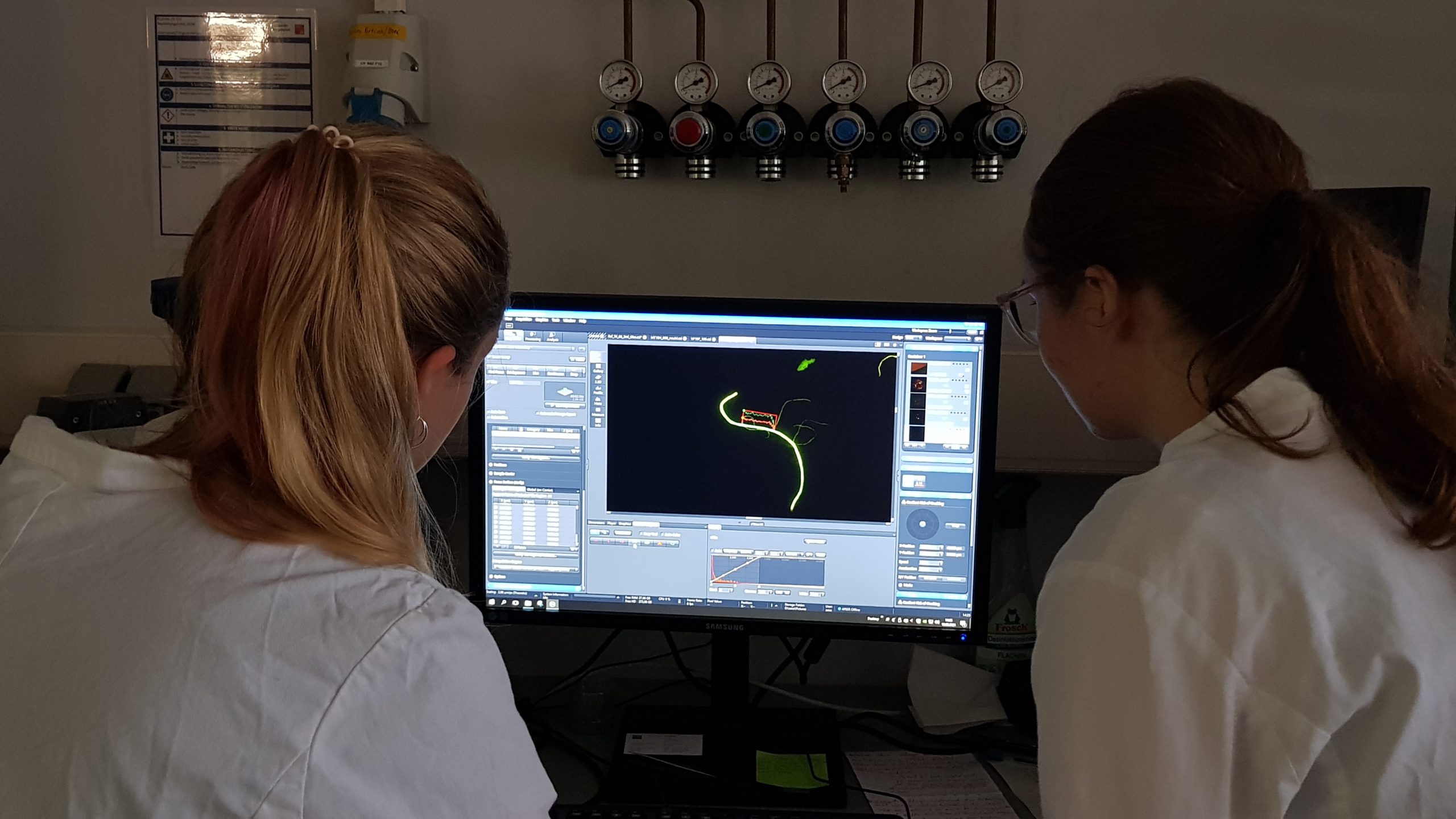 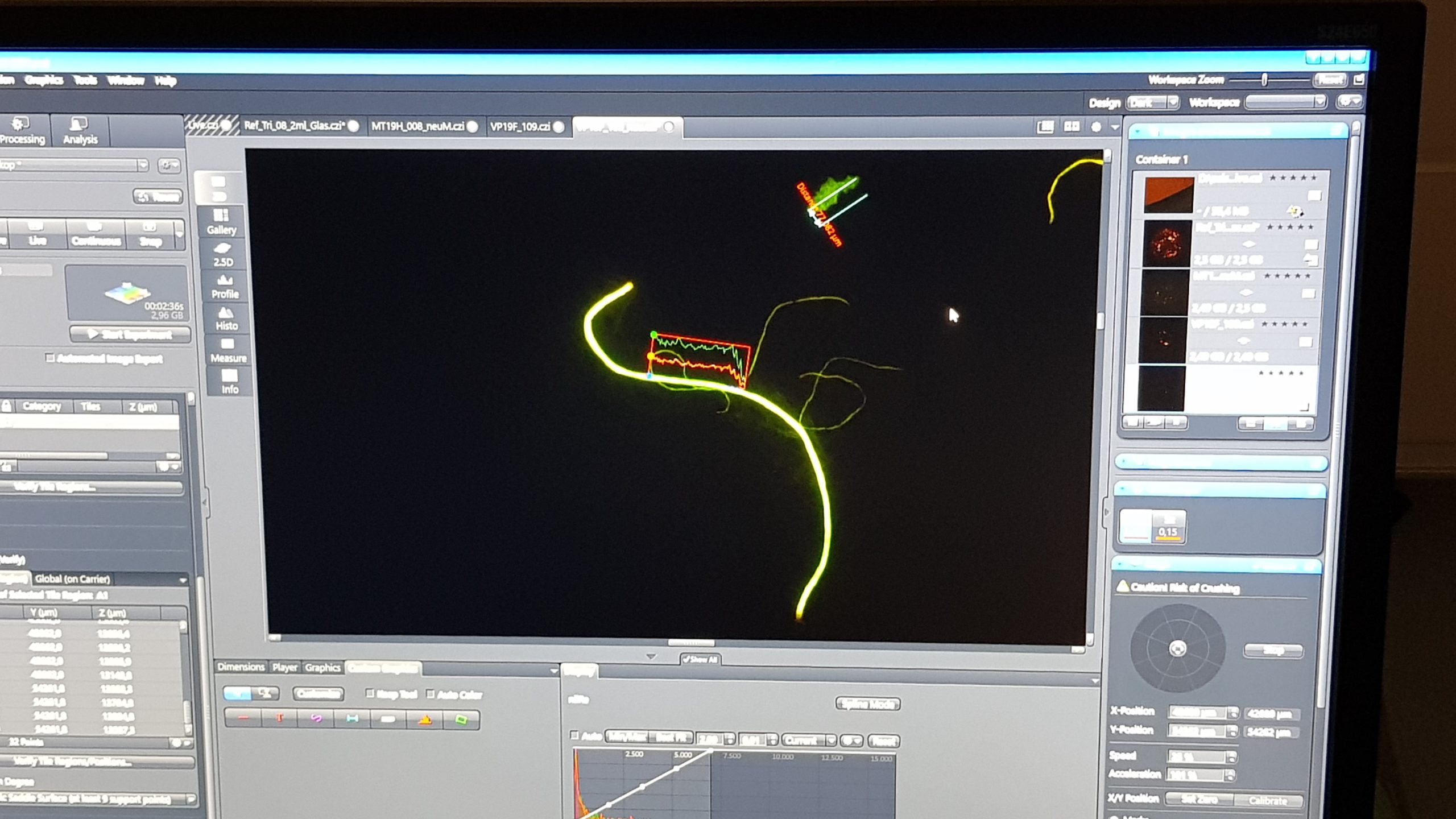 In my working group, we have been testing and establishing a staining method with Nile red in combination with fluorescence microscopy since 2013, a method that originally was used in the context of microbiological investigations. The advantages of the method are that a pre-selection already takes place through the staining of microplastic particles. This increases the sample throughput as the scientist carrying out the analysis does not have to identify and classify each particle individually. The parallel examination of the particles identified with Nile Red via Raman spectroscopy results in convincing agreement rates of greater than 90%. With fluorescence microscopy, we can reliably detect particles larger than 5 µm and I am confident that if we increase the resolution, we can expand to particle sizes down to 1 µm.
One option for making this process even more reliable and more efficient is automated particle identification. The challenge here is that the filter background is mapped differently for each sample and, depending on the initial matrix, the identification of the particles marked by fluorescence is still carried out by the scientist.

Where do you see the future of microplastics research?

We started in microplastics research as many others did – with water samples and sediment samples from beaches. Subsequent projects have led us into the analysis of mussels, lugworms, fish, etc. and the analysis of soil and atmospheric samples. Whenever we planned such a new project, we were uncertain in advance whether we would find microplastics at all. After the experiences of the last few years, this has fundamentally changed. We know when we start a new project that we will find microplastics. It may be in different concentrations or particle sizes; but it is always there.

Even though public interest in the topic of microplastics is still high, I can see that some people are getting a little tired of the topic. Unfortunately, this is also reflected in the funding of projects which have decreased significantly in recent times or are even non-existent. In my opinion, there is a risk that very well-trained young scientists with ambition and a high level of commitment will have to turn away from microplastics research because there is not enough funding for positions and research projects. In this, we risk losing an excellent potential of young researchers that have co-developed the discipline.

However, I see the half-life of microplastics research as being very similar to topics such as research on climate change or biodiversity. We can no longer remove the substance plastic from our lives and thus from our environment. The processes and consequences for our environment and humans associated with this ubiquitous presence must be further researched.